April Title - Destiny of the Republic 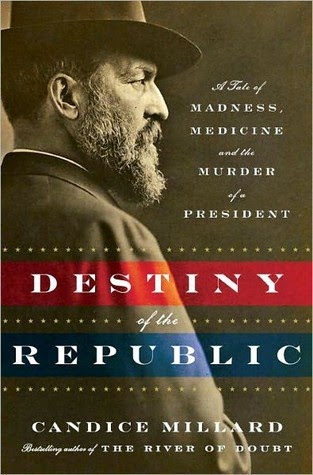 Our April book selection is Destiny of the Republic by Candice Millard.  Pick up a copy of the book at the library.  Also available in large print, audio CD, ebook and eaudiobook so there's no excuse not to read this one!  Join us on Wednesday April 16th at 1pm by the fireplace at the library.


James A. Garfield was one of the most extraordinary men ever elected president. Born into abject poverty, he rose to become a wunderkind scholar, a Civil War hero, and a renowned and admired reformist congressman. Nominated for president against his will, he engaged in a fierce battle with the corrupt political establishment. But four months after his inauguration, a deranged office seeker tracked Garfield down and shot him in the back.

But the shot didn’t kill Garfield. The drama of what hap­pened subsequently is a powerful story of a nation in tur­moil. The unhinged assassin’s half-delivered strike shattered the fragile national mood of a country so recently fractured by civil war, and left the wounded president as the object of a bitter behind-the-scenes struggle for power—over his administration, over the nation’s future, and, hauntingly, over his medical care. A team of physicians administered shockingly archaic treatments, to disastrous effect. As his con­dition worsened, Garfield received help: Alexander Graham Bell, the inventor of the telephone, worked around the clock to invent a new device capable of finding the bullet.

Meticulously researched, epic in scope, and pulsating with an intimate human focus and high-velocity narrative drive, The Destiny of the Republic will stand alongside The Devil in the White City and The Professor and the Madman as a classic of narrative history.  goodreads.com