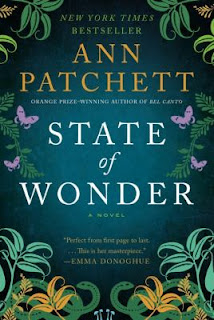 Join us Wednesday December 12th at 1pm for a discussion of State of Wonder by Ann Patchett. Copies are available to check out at the library.  The group meets by the library fireplace.

Ann Patchett raises the bar with State of Wonder, a provocative and ambitious novel set deep in the Amazon jungle. Research scientist Dr. Marina Singh is sent to Brazil to track down her former mentor, Dr. Annick Swenson, who seems to have disappeared in the Amazon while working on an extremely valuable new drug. The last person who was sent to find her died before he could complete his mission. Plagued by trepidation, Marina embarks on an odyssey into the insect-infested jungle in hopes of finding answers to the questions about her friend's death, her company's future, and her own past. Once found, Dr. Swenson is as imperious and uncompromising as ever. But while she is as threatening as anything the jungle has to offer, the greatest sacrifices to be made are the ones Dr. Swenson asks of herself, and will ultimately ask of Marina. State of Wonder is a world unto itself, where unlikely beauty stands beside unimaginable loss. It is a tale that leads the reader into the very heart of darkness, and then shows us what lies on the other side.

In this superbly rendered novel, Patchett (Run) takes the reader into the primitive world of the Amazon in Brazil. Pharmacologist Marina Singh from Minnesota works for the pharmaceutical company Vogel. Her colleague Anders Eckman dies in the jungle while trying to locate Dr. Annick Swenson, who has been working on a fertility drug for Vogel by studying the Lakashi people, whose women bear children into old age. Marina's journey to the Amazon to find the uncommunicative and intimidating Dr. Swen-son and to discover the details of Anders's death is fraught with poisonous snakes and poisonous memories, malarial mosquitoes and sickening losses, but her time among the Lakashi tribe is transformative. VERDICT Not a sentimental view of a primitive people, Patchett's portrayal is as wonderful as it is frightening and foreign. Patchett exhibits an extraordinary ability to bring the horrors and the wonders of the Amazon jungle to life, and her singular characters are wonderfully drawn. Readers who enjoy exotic locales will especially be interested, but all will find this story powerful and captivating. Library Journal c2011.