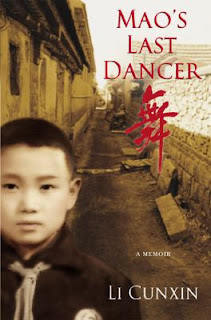 For August we will be reading Mao's Last Dancer
by Li Cunxin.
Discussion on 8/26 at 1pm.
In 1961, three years of Mao's Great Leap Forward-along with three years of poor harvests-had left a rural China suffering terribly from disease and deprivation. Li Cunxin, his parents' sixth son, lived in a small house with twenty of his relatives and, along with the rest of his family, subsisted for years on the verge of starvation. But when he was eleven years old, Madame Mao decided to revive the Peking Dance Academy, and sent her men into the countryside searching for children to attend. Chosen on the basis of his physique alone, Li Cunxin was taken from his family and sent to the city for rigorous training. What follows is the story of how a small, terrified, lonely boy became one of the greatest ballet dancers in the world. One part Falling Leaves, one part Billy Eliot, Mao's Last Dancer is an unforgettable memoir of hope and courage.
Posted by Hopkinton Town Library No comments: