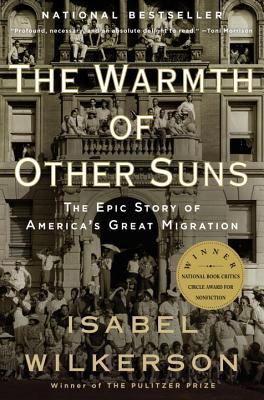 Join us Wednesday January 16th at 1pm for a discussion of The Warmth of Other Suns by Isabel Wilkerson. Copies are available to check out at the library.  The group meets by the library fireplace.


Ida Mae Brandon Gladney, a sharecropper's wife, left Mississippi for Milwaukee in 1937, after her cousin was falsely accused of stealing a white man's turkeys and was almost beaten to death. In 1945, George Swanson Starling, a citrus picker, fled Florida for Harlem after learning of the grove owners' plans to give him a "necktie party" (a lynching). Robert Joseph Pershing Foster made his trek from Louisiana to California in 1953, embittered by "the absurdity that he was doing surgery for the United States Army and couldn't operate in his own home town." Anchored to these three stories is Pulitzer Prize-winning journalist Wilkerson's magnificent, extensively researched study of the "great migration," the exodus of six million black Southerners out of the terror of Jim Crow to an "uncertain existence" in the North and Midwest. Wilkerson deftly incorporates sociological and historical studies into the novelistic narratives of Gladney, Starling, and Pershing settling in new lands, building anew, and often finding that they have not left racism behind. The drama, poignancy, and romance of a classic immigrant saga pervade this book, hold the reader in its grasp, and resonate long after the reading is done.  --Publisher Weekly