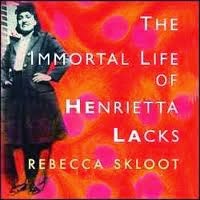 Our February book is The Immortal Life of Henrietta Lacks by Rebecca Skloot.  Pick up a copy at the library today for our meeting on Wednesday February 19th at 1pm.


Her name was Henrietta Lacks, but scientists know her as HeLa. She was a poor Southern tobacco farmer, yet her cells--taken without her knowledge--became one of the most important tools in medicine. The first "immortal" human cells grown in culture, they are still alive today, though she has been dead for more than sixty years. HeLa cells were vital for developing the polio vaccine; uncovered secrets of cancer and viruses; helped lead to in vitro fertilization, cloning, and gene mapping; and have been bought and sold by the billions. Yet Henrietta Lacks is buried in an unmarked grave. Her family did not learn of her "immortality" until more than twenty years after her death, when scientists began using her husband and children in research without informed consent. The story of the Lacks family is inextricably connected to the dark history of experimentation on African Americans, the birth of bioethics, and the legal battles over whether we control the stuff we are made of.--From publisher description.

Welcome to the Hopkinton Town Library Book Discussion Group blog! Find out this month's selection, discover great reading links and book group resources, or leave comments. Join us in person, online or both!

An American Marriage
by Tayari Jones
Wednesday February 19 at 1pm