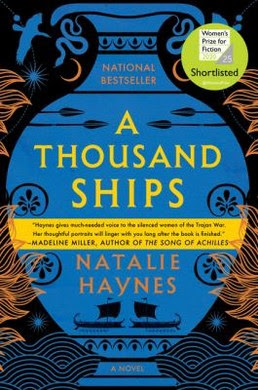 Our next book is A Thousand Ships: A Novel by Natalie Haynes; the Trojan War from the point of view of the silenced women! Lots of options for accessing this title: we will have print copies (here by Wednesday 6/1), an audio CD edition, hoopla audiobook, Overdrive/Libby audiobook and ebook.  We'll meet in person and via zoom on Wednesday June 29th at 1pm.

Broadcaster and classicist Natalie Haynes amplifies the muted voices of women in her all-female retelling of the Trojan War. From slaves to queens to muses to deities, she takes the scraps of women Homer offers us in THE ILIAD and THE ODYSSEY and patches them into full characters with powerful stories.

In A THOUSAND SHIPS, Homer is writing yet another epic. Desperate for inspiration, he beseeches Calliope, the muse of epic poetry and the novel’s sporadic narrator, to lend him her song once more. She obliges, albeit reluctantly, intent on two objectives: teaching Homer the true meaning of war and memorializing the women left unsung.

"[T]he novel draws cohesion from the fragmented voices of women. In presenting her audience with so many voices, Haynes could have written a cacophony. Instead, she has conducted a choir."

What follows is a series of primarily self-contained chapters tackling not only the Trojan War but also its long and drawn-out aftermath. For the most part, each chapter is its own entity and does not follow a linear timeline. Creusa runs through a smoke-choked city in search of her husband. Briseis is enslaved by her family’s murderer. Laodamia laments the death of her king. A rejected Oenone raises her son as a single mother atop Mount Ida.

While these stories give A THOUSAND SHIPS the feel of a series of thematically connected vignettes, the book is lent narrative scaffolding by the Trojan women and Penelope's letters to her husband, Odysseus, transforming it into something between a collection and a novel.

Nestled between stories of goddesses arguing over golden apples and wives offering prophetic warnings to their husbands, the Trojan women are living in the direct aftermath of the war. Their stories converge in these chapters as they huddle together on a beach at the outskirts of the Greek encampment. Their fates hang in a precarious balance. They are held captive by the Greeks and are waiting to be divided as spoils of war among the men who have slaughtered their loved ones and laid waste to their homes. Still, they continue to hope --- for those who made it out of Troy and for one another --- and, in doing so, exhibit bravery even in the depths of loss and despair.

Penelope’s letters, on the other hand, offer a witty respite from the traumatic stories of other women as she awaits her husband’s return in a quiet rage. She listens as the bard sings songs of his exploits across the seas and grows more cross by the year as she imagines Odysseus getting sidetracked from his destination (her) by an endless parade of monsters, cannibals and enchantresses.

Even as the tone of the chapters sways from daunted to desperate to downright ruthless, the novel draws cohesion from the fragmented voices of women. In presenting her audience with so many voices, Haynes could have written a cacophony. Instead, she has conducted a choir.

If THE ILIAD is an ode to the actors, then A THOUSAND SHIPS commemorates those acted upon: “victims of men, slaves of men, survivors of men.” With the wisdom of Athena and a pinch of humor, Haynes considers the many ways in which women exhibit strength, even in situations of relative powerlessness.

Reviewed by Kayla Provencher on January 29, 2021